We took the Jetty Project to two recent conferences in the UK and in the US.

First up was the British Sociological Association’s Annual Conference in Glasgow on the theme of “Societies in Transition”. We were asked to think beyond the traditional powerpoint presentation. And so we took some objects including a piece of the old Dunston Staiths’ handrail (before the renovation), a piece of coal and some Aquadyne. 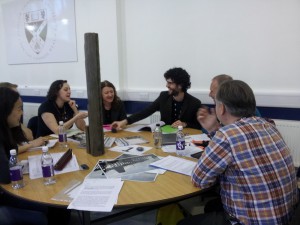 As an interdisciplinary art project, the Jetty Project has insights of interest to a range of disciplines. And so our next stop was the Association of American Geographers in Chicago.  Many geographers have been attentive to the spatial, aesthetic and scalar interpretations of art. And there has been much debate about creative inter-disciplinarity (Hawkins 2010). Geographers have shown how artistic practices can help us to reimagine of urban futures and our approach towards urban ecology, in particular to wilderness’: “Imaginative interventions by artists, writers, and scientists remind us that looking, thinking, and representing the familiar in an unfamiliar way can also be a kind of radical cultural and political praxis” (Gandy 2013: 1311).

Located within a session interrogating heritage and changing environments, we presented the Jetty Project’s urban intervention and how it helped to spark interest in the future of a supposedly ‘obsolete’ site.

Prof. Simon Guy and Dr. Angela Connelly will be presenting their initial research around the Jetty Art Project at the Royal Geographical Society-Institute of British Geographers (RGS-IBG) in London on Friday, 29th August. The title is Art and Sustainability: Design in the Making, which will be delivered in a session entitled ‘Complicating the co-production of art: Hidden…